I could not travel to the Toronto t2k17 hackathon earlier this year, in circumstances which left me with a voucher for an already purchased intercontinental flight ticket and hiking clothes I had bought for a trip into the Canadian mountains.

But it turned out Theo was already making plans for another hackathon, s2k17, which also included a hike, and soon I was invited to travel to Canada in November. I got to use my voucher and hiking clothes within the same year, and this opportunity turned out to be more special than I could have ever imagined! 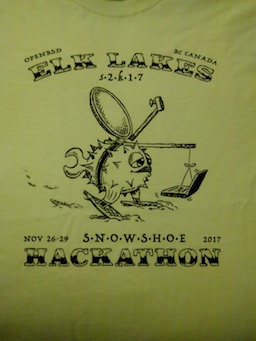 To be honest, I had some concerns:

The outside toilet aside, none of my concerns were warranted!

We hiked in at +7 deg C. My hiking clothes were too warm unless I removed most layers. The Canadians were disappointed and wore shorts and sandals. It was raining. The snow on the ground was slushy and gave way unevenly with each step. I got caught up in my snowshoes twice and fell on my face into the sludge, my pack felt heavy as I tried to get up, my legs were hurting... But all of that just rounded off the experience. I was on an adventure and the surroundings were just breathtaking! Around each corner waited a landscape full of tall pine trees with several layers of humongous rocky snowy mountains as a backdrop, and I just couldn't see enough of it.

Bob had prepared a delicious menu for breakfasts and dinners, and each dish took culinary preferences of everyone into consideration. We got to choose between tasty big mushrooms or fish or meat. Extra eggs for vegetarians kept the group's protein levels balanced. There was yoghurt and homemade banana bread for breakfast. Philip and Claudio assisted by cooking spicy veggie curries and cheese fondue. Unusual for hackathons, there was no beer to drink at all (too heavy). Instead there was a container of wine to go with each dinner. Combined with the day snacks I had brought along, I ended up eating more than I would usually eat at home! 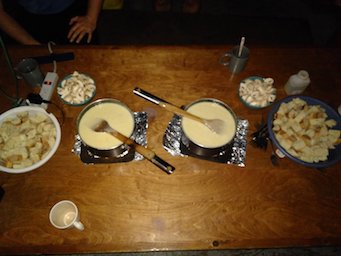 Cheese fondue by claudio@ (photo by me)

I had prepared for the timezone shift by sleeping until noon at home for a week. In Canada I kept waking up between 5am and 6am each morning, which means I had shifted forward further by just 1 hour. This turned out to be very compatible with the rest of the group. Everyone went to bed around 10pm and woke up shortly before sunrise, and we would start hacking as soon as the generator outside had been powered up and the sat uplink had connected, before the sun was fully out.

I got used to washing my hands with soap and snow. My clothes didn't start to smell bad. For most of the time I wasn't wearing cotton but comfortable wool shirts and socks, and that really makes a difference.

Bob's friend Howie supported us by handling many daily chores at the hut, and he went out hiking every day. I came along once, and while he showed us around the area he told impossible hiking stories from his youth, such as how he survived being caught up in 6 avalanches in one day. 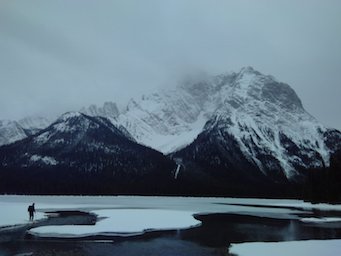 Howie at Lower Elk Lake (photo by me)

I spent most of my hacking time on teaching the iwm(4) driver to run scans in the background while being connected to an access point. This is a first step towards proper wifi roaming in OpenBSD. My initial diff has been posted to tech@ and is currently waiting to be tested thoroughly. If you can test it on either 6.2 or -current, please do and tell me your results.

To test my changes I had brought two additional access points, separate from the main access point everyone else was using. Shielding them off with tinfoil made a huge difference to signal propagation in the tiny hut, so I could wander around and find spots which triggered roaming on my laptop, such as the lower corner beneath the sink. I left a rather ghostly impression on others while meandering about the hut and mumbling to myself, and was eventually awarded my very own tinfoil ghost assistant by Theo: 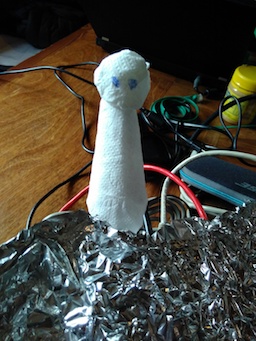 The tinfoil ghost (photo by me)

I committed a change which prevents the kernel from reporting WEP and WPA keys back to userland. Such keys have sometimes ended up on our public mailing lists as part of copy-pasted ifconfig output. Such mistakes will be prevented in the future. And after all, there is no good reason to abuse the kernel as a password store and query secret keys from it.

I also committed a minor bug fix to the athn(4) driver after figuring out why the received signal strength levels displayed by this driver made no sense at all.

The hike back was on a longer and more difficult trail than the hike in, but very enjoyable nonetheless. The temperature had long dropped below freezing again. Occasionally we had to work as a group to keep pulks from sliding sideways down a slope. Theo, Benno, and Claudio pulled along the bulk of the load at impressive speed. I officially arrived last at the parking lot, after furiously racing Phillip Guenther in vain for the last few hundred meters. My legs have since recovered and are waiting for another hike. 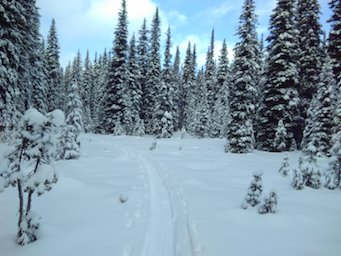 Following the tracks of Howie, Mark Kettenis, and Theo (photo by me)

Thanks a lot to everyone involved for organising this event, and to everyone who was there. You all made this trip very enjoyable! It was a blast, and it more than made up for missing t2k17!